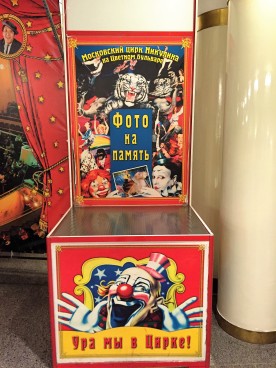 Greg, Rebecca and I spent a fun Saturday night at the Moscow Circus.  There are actually two different circus shows in Moscow…one traditional and one “new”.  We opted for the original circus, located a short car ride from our hotel. Thankfully, the concierge at the Metropol was able to score us three great seats for the sold out performance at a cost of about $35 each. (According to the hotel concierge, the original circus is only a 20 minute walk from the hotel, but since it was a cold and rainy night, we opted for Uber.)

Every seat is a great seat in the small one-ring arena with stadium seating. A live orchestra adds excitement to the night. A small café serves wine, vodka, soft drinks and snacks..  Popcorn and ice cream are also available.

Be warned…the traditional circus is heavy on animal acts, including dancing elephants and tightrope-walking cats.

Twenty-four years ago, I took a job that changed my life. I signed on as one of the first employees of a new company selling MiG fighter jet flights in Russia. Now, I'm considered something of an Adventure Goddess. I've written a book about adventure and have flown a fighter jet, floated in zero-g and a whole lot more. Life is either an incredible adventure or nothing at all, right? View all posts by Jane